“Even though I knew I would never make a penny working with Hankin, whenever he asks me to be in a project of his–to this day–I say, ‘How high?'” said actor Paul Willson who has acted in several of Hankin’s films.

“I also have way too many magazine subscriptions.”

Like many of his friends Hankin broke down and returned to Los Angeles, where he’s blossomed as an actor and works at a breathtaking pace more suited for someone half his age. But it’s not certain whether Hankin, often seen riding his mountain bike around his neighborhood in Venice, is even aware of his age. 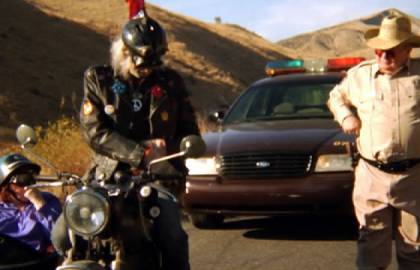 The Outlaw Emmett Deemush from Haydenfilms Film Festival
“When he stepped off the plane in San Francisco 50 years ago, he looked like a Jewish dental student or a Yeshiva scholar, with an overcoat, horned rimmed glasses, and a short haircut,” said Myerson.

“He’s a guy who’s transformed himself based on his perception of his life experiences several times, and that kind of flexibility I find magical.”

That doesn’t mean Hankin won’t marvel at the trajectory of his life’s amazing journey.

“Did I ever want to become an actor?” reflects Hankin. “I wanted to be a clown, a painter, a standup comic … It just happened. I can’t memorize lines. When I did that long speech at the Winnebego on Breaking Bad, it nearly killed me. What keeps me going is that I believe somewhere in my head I have something that I have to get out of there. It’s like the thorn in the paw of the lion and it bugs the shit out of me. I’m leading up to it.”