“Finally, after ten days or so, [director] Alan Myerson decided it’s time to put the ‘Man on the Street’ back on the show. With trepidation, the actors are hovering in the wings, waiting to hear what the audience suggests is the news topic of the day.” Amidst that silence and tension Hankin came out and asked for a suggestion. Somebody in the audience said, ‘San Francisco coffee stinks.’ According to Gottlieb, “You could hear the packed audience (of 500 seats) breath a palpable sigh of relief. ‘At least they’re not going to do anything on the assassination.’”

“Then Larry interrupts and says, ‘Don’t you read the papers? The fucking president was shot! And the guy who shot him was shot. I don’t understand you people.”

“You could hear 500 sphincters snapping shut,'” recalls Hankin. “I immediately followed in a disappointed manner with: ‘Okay. Okay. We’ll take ‘San Francisco has bad coffee,’ and the ‘Man on The Street’ interviews began. Point made. Fine. We did it. No harm, no foul, I thought. But no way.”

“When I got backstage the entire cast were waiting for me, getting on my case about bringing down the audience and ruining the show — real nasty, angry crap that blew me away. I was completely confused, until Alan Myerson came backstage, witnessed this, and defended me, telling the rest of the cast that I ‘did the right thing, we are a contemporary political and a social theater,’ and etc. etc. He saved my ass many times during those years.”

From 1963 onward The Committee was on a collision course with history. The theater at 622 Broadway became the destination of a veritable who’s who of counter-culture types.

“Monday was when we were closed, and Alan thought we could monetize things by renting out the space. So, friends would use it to perform,” remembers Hankin.

“Timothy Leary, Frank Zappa and the Mothers of Invention, [guitarist] Sandy Bull, and the Grateful Dead played there. Lenny Bruce would drop by; beat poet Michael McClure did his famous play The Beard, which at the time had curse words in it and sex on stage. By today’s standards, it would be considered very mild, but in those days, say ‘fuck’ on stage and you were going to be sent away for three years. It was fucking ridiculous. But, you never knew what was going to be on, and what well known people would come and use the stage.”

Any expose on San Francisco in the 1960s would be revisionist were it to gloss over the drug culture or, in Hankin’s case, the drug culture’s impact on his development as an artist.

Hankin’s foray into writing during this period, admittedly under the influence, resulted in A Fool’s Play, an absurdist take on authority set in King Arthur’s court and performed by the company at The Committee’s second San Francisco location on Montgomery Street.

“I think I may have taken Hankin on his first acid trip,” remembers Hesseman. “I do remember one time doing acid together out at Stinson Beach and thinking as he waded into the ocean to re-kindle his relationship with ‘mother earth’ that I was going to be in trouble getting back through town to the house we were staying at 4 in the afternoon with this cat, dripping wet in January in Northern California.”

With the twilight of the ‘60s came lucrative job opportunities in Hollywood, and Committee members, some more than others, gravitated to Los Angeles. Hankin, who along with Chris Ross booked a role on the movie Viva Max, with Peter Ustinov. Roger Bowen played Colonel Blake in Robert Altman’s MASH. Carl Gottlieb, who also appeared in MASH and went on to write Jaws and many other films was snatched up by The Smothers Brothers Comedy Hour to work on its writing staff. Peter Bonerz was cast on The Bob Newhart Show, Howard Hesseman (WKRP In Cincinnati/Head of The Class) became a TV star in his own right, and Alan Myerson began a long, successful TV and film directing career.

Hankin appeared in The Committee’s final performance in 1973, just as he had in its first show ten years earlier. Although he was offered the occasional TV and film role, some bad times, including a period of homelessness lay ahead.

“Shakespeare said, ‘the worst turns to laughter,’” Hankin told us. “I lived in my car for a year. And it’s not romantic at all, because I wanted money and comfort, but I am so happy I lived in my car. It makes for good stories to tell.”

At home in Venice, California. 2013 (Photo by Daniel Beaman) That itinerant period gave birth to Hankin’s two seminal characters Emmett and Sometimes Jones (the lead character in Hankin’s Academy-Award nominated short film, Solly’s Diner), based on the street people he encountered. Both have been recurring characters in the many video and film shorts he directs, produces, and edits himself. 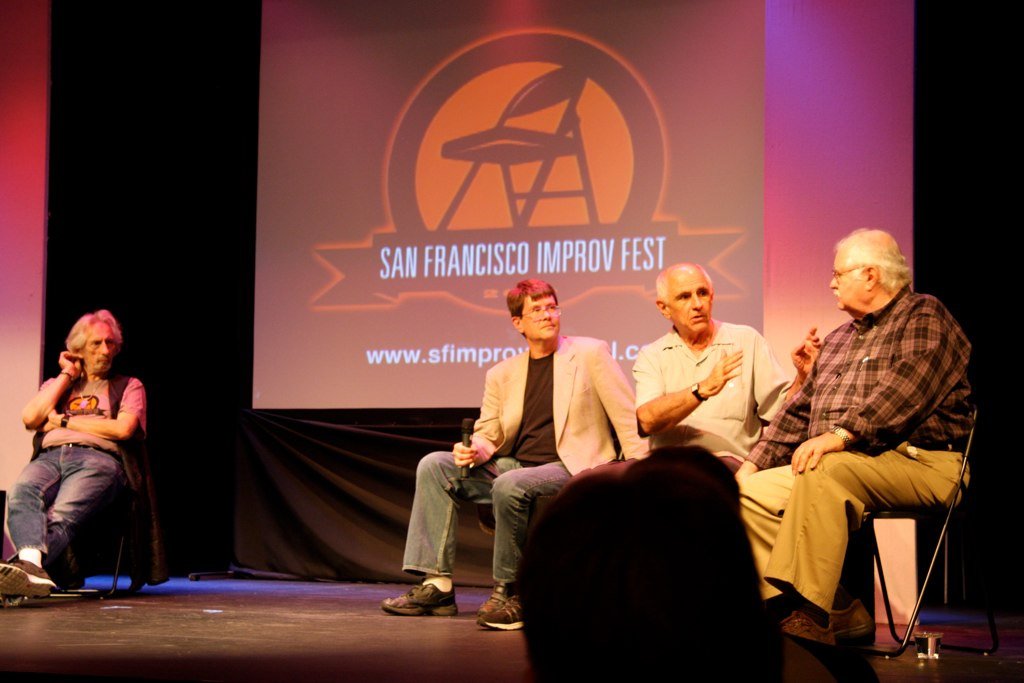